Posted on September 23, 2009 by whiskeysplace

The NEA is in the news, with at least 6 federal laws and regulations violated by a conference call with artists, a PR agency, ﻿the White House Office of Public Engagement, and United We Serve, designed to use the NEA to (illegally) lobby for ObamaCare. Both Big Hollywood and Big Government have all the coverage on the people and the issues you could ask for. What the mainstream media refuses, actively, to cover.

But just as interesting is the nature of the people involved. As Charles Winecoff in Big Hollywood notes:

Last month, National Endowment for the Arts Chairman Rocco Landesman said that, in American politics, ”the arts are a little bit of a target. The subtext is that it is elitist, left wing, maybe even a little gay.” 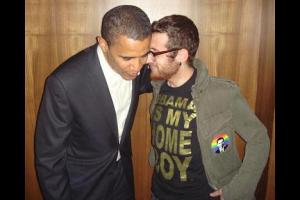 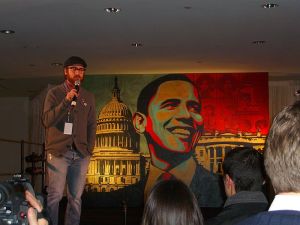 Witness the NEA’s ﻿Yosi Sergant, Director of Communications. Neither picture of Sergant depicts a man who is exactly masculine. ﻿Buffy Wicks, Deputy Director of the White House Office of Public Engagement, a former Obama Campaign organizer and political organizer would not inspire confidence as a non-elitist, non-left wing presence either. 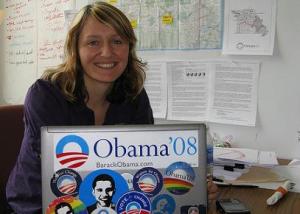 No word on which artists created the art work below, but it would tend to re-inforce the “little bit gay” part to which Landesman refers: 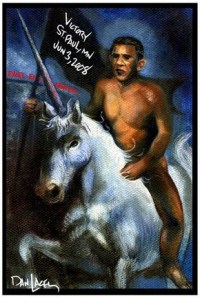 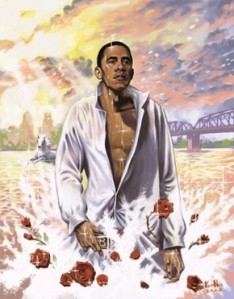 Perhaps they were the work of someone like this man: 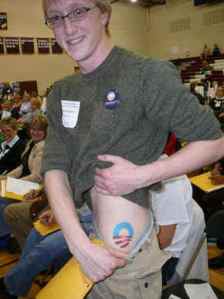 In a workplace with mostly women, a traditional masculine presence is not very welcome. While women certainly like the Alpha Male, most men are not in fact, Alpha, and the sort of mocking, good-natured teasing found in male-dominated workplaces is not very compatible with, particularly, younger women. Who prefer women to be “strong” by men being, well fairly effeminate. This has the side benefit of preventing Beta Males from expressing (unwanted) romantic interest in their female co-workers.

Younger women also like Gays. ﻿Heather Havrilesky, Salon’s Television critic, has a post on how much she loves gays.

﻿
Gay people are just like straight people, only they’re smarter and funnier and more interesting.

Also, they smell better. They’ve read more books, sure. And they have more friends — that part isn’t surprising. Because they’re better educated, generally speaking, and also a little wiser. Like blondes, they have more fun.

When people talk about homos taking over the planet, my heart races a little faster. A planet ruled by gays! Imagine how good the scones will be!

Plus, there’ll be prettier yards, less crime, more funding for the arts but less bad poetry, fewer rude, disheveled dogs roaming loose on the streets, and less weak coffee. I’m guessing there aren’t many gay Hummer owners. McMansions would surely fall out of fashion, along with miniblinds, vinyl siding and Applebee’s.
…
﻿I’ve been idealizing gay people ever since I moved to the Castro, in San Francisco, at the tender age of 25, where I was surrounded every day by beautiful, fit, talkative men. Suddenly I knew how Captain Kirk felt when he was beamed down onto a planet of gorgeous lady aliens who were nonetheless impatient with his dull earthling ways. Sure, I’ve been urged over and over again not to assume that all gay and lesbian peoples of the globe are wickedly witty and charming and fun-loving and smart, but each new gay person I meet only further clouds my vision with his/her general-purpose excellence and flair.

Younger women in professional settings do tend to idealize gays, and prefer gays to the vast majority of men (who are basically, Beta Males). Gays have fashion sense (or so goes the stereotype), most of the famous fashion designers are gay men, and gay men are assumed to be like Beta males, except far more politically correct, and without all the parts of masculinity women don’t like in Beta Males. Most younger, professional women, if they could push a magic button and make most ordinary, Beta Men gay, would break their fingers pushing it, over and over again.

The horrors that is Look at This Hipster become understandable when certain workplaces are dominated by women such as Heather Hravelisky or Buffy Wicks. Even men not inclined to effeminancy will adopt the clothing and mannerisms, to blend in and not arouse the ire of a mostly female staff. Public Relations, Marketing, Human Resources, Education, Health Care, and Government are mostly female. USA Today reports that women are now on the cusp of being the majority of the workforce, with men losing 74% of the 6.4 million jobs lost since the recession began in December 2007. Local governments have cut 86,000 men from the payrolls while adding 167,000 women since the Recession began.

As the Weekly Standard noted, women’s groups including the National Organization for Women persuaded Obama to change the Stimulus Bill, nearly $800 billion, so that the bulk of the spending went to increase or retain employment for nurses, teachers, social workers, and librarians. All fields dominated by women. This was possible (despite the obvious fall-out in that the nation did not go back to work, merely female employment was maintained or increased) because as the article in the Weekly Standard notes, feminists like Eleanor Smeal, Feminist Majority President, Nancy Pelosi, the National Organization of Women, the Institute for Women’s Policy Research, and the National Women’s Law Center, had extensive political connections to the Obama Administration. Which was itself filled with many women, nearly all of whom were deeply sympathetic to the idea that the majority of stimulus funds should be spent on women, to permanently transform the American workplace into one dominated by women.

Our elites, cultural and political, will look ever more like Buffy Wicks and Yosi Sergant, as the workforce is dominated by the fields of social work, education, health care, government, marketing, human resources, public relations, and little else. Already the Democratic Political elite at the lower levels, where most of the grunt work of organizing is done, tends to be made up of women like Wicks. Who have no idea how to relate to men who don’t look like Yosi Sergant, and have even less idea of the actual makeup of the American workforce and population.

Lawrence Summers, the President’s Economic Advisor believes that the US will face a permanent unemployment rate of between 10-15% for the next ten years, and perhaps forever, most of the unemployed being men. That further, the jobs lost in manufacturing, transportation, energy extraction, and so on will never come back. In the meantime, the jobs that DO exist are in areas where staff are elitist, leftist, and a little bit gay.

Which sets up a large power struggle. As younger women move into the workplace, they want a nation of nurses, teachers, baristas, marketers, human resources people, and public relations people. Cool jobs for hip people. For the elites, this sounds like a good idea. What to do with say, former Chrysler Managers cleaning toilets at 49 is irrelevant. Older straight White Men are of little concern to the Buffy Wicks and the Yosi Sergants. As I noted in my very first post Can Barack Obama Win With the Youth Vote the bulk of the population is comprised of people in their late twenties to mid fifties. The prime working age.

A pre-revolutionary condition is where rising expectations, in income and personal wealth, are suddenly dashed for most people, who can now look forward to only increasingly diminished hard times. This was the case in France of 1789, when after a sustained increase in wealth and income in rural France, successive bad harvests, increased taxes (to pay for assistance to the Americans in the Revolutionary War), and collapse of local industry due to foreign competition, led inexorably to the storming of the Bastille by peasants who expected more.

More than anything, the damning self-indictment by Rocco Landesman that the arts (and by extension the artists themselves, as well as our elites cultural and political) are elitist, left-wing, and a little bit gay are accurate. The effeminate buffoons of the hipster class, such as Sergant, and the women who insist on them, such as Buffy Wicks, have no answer for the Dave Duncansons, taking jobs cleaning toilets to put some money, any money, in the family budget. “Let them become gay baristas” is not an answer.

Just as the increasingly female-dominated workplaces of health, education, welfare, hospitality, and marketing, public relations, and human resources are vastly disconnected from the men who used to make up the nations spot-welders, machinists, factory workers, plumbers, carpenters, construction workers, engineers, and project managers, the feminized, “sort of gay” elites have no connection to the vast “uncool” populace who demand economic growth. Not permanent unemployment (mostly male) in the 10-15% range, and higher unofficially.

Certainly most Americans would regard a Yosi Sergant or a Buffy Wicks as creatures from another world, even stranger (and less well regarded) as the courtiers of Louis XVI. While Aristocracies, beloved of women, often feature those with left wing views, who are elitists, and of effeminate manners, even they must deliver for the people or be swept aside. All the tragically hip, ultra ironic, clothes, and fawning, deferential manner to more powerful men won’t change this fact. Something even Marie Antoinette, who famously had a marble floored stable to play milkmaid, found out.

Conservative blogger focusing on culture, business, technology, and how they intersect.
View all posts by whiskeysplace →
This entry was posted in culture, elites, feminized, gay, men, more, nea, women. Bookmark the permalink.

23 Responses to Elitist, Left Wing, and a Little Bit Gay: Our Feminized Cultural and Political Elite