The Future Lies In Your Hand: Phone TV vs 3-D TV

Posted on December 31, 2010 by whiskeysplace

A recent series of Financial Times columns shows why 3-D TV will not be Hollywood’s savior, and some combination of Kindle, Nook, Ipad, Ipod, Iphone, Netbook, or other cheap, flexible, and handy tablet sized device will be the consumption device of the future. This has profound implications for the type of media, with the possibility of all sorts of new content over-turning the Big Media stranglehold, and not incidentally refighting the culture wars. Think a lot more “Rifleman” type Westerns, instead of say, “Glee.”

First, a Financial Times Panel tested 3-D TVs and the results were not pretty. Just as most 3-D films have flopped (there’s only one Avatar), daily use of 3-D TV is not a happy experience. Glasses are required, and it can be a strain for some. The FT panel, including six kids, four girls and two boys, ages 2 to 10, with some grown-ups, found the extended use tiresome:

At the same time, even 3D-light can be a strain to watch for some. After an hour, at least one child had her plastic glasses off and was curled up in a ball, declaring that her eyes hurt.

By the time the children’s test session switched to Pain – a video game in which a rubbery adolescent thrill-jockey is launched from a slingshot against buildings, rubbish bins and other urban-landscape targets – the kids were happy to play in plain old 2D.

The 3-D effect for the World Cup broadcasts was compared to cut-outs in dioramas, not a fully immersive effect.

Another Financial Times article notes that Sony has bet big on 3-D TV:

A nimbly-executed product launch is no guarantee that consumers will embrace Sony’s 3D world. A shaky US economy, the scarcity of original 3D content so far, and consumer discomfort with clunky 3D glasses have slowed initial sales of 3D TVs.

Research groups estimate that 3m-4m 3D sets will be shipped this year, equal to about 3 per cent of global high-definition TV sales and below some analysts’ and industry executives’ early predictions.

Sony’s ambitions are quite large in this area, but history shows that consumers prefer convenience over high-quality of reproduction. While obviously, sound and color in theaters won over silent films and black and white movies, consumers were not required to invest in anything but a ticket. Perhaps only color television and High Definition (the latter still only at 80% penetration in the US market) mark consumer preference for higher quality media reproduction, over convenience. Every other major consumer decision has been in favor of convenience. From the victory of VHS over Betamax, and later VHS over LaserDiscs, to Walkmen and cassette tapes over LPs, then CDs over LPs and tapes, and finally MP3s over CDs, consumers have been choosing convenience and on-the-go music over high quality reproduction, and the same with video. 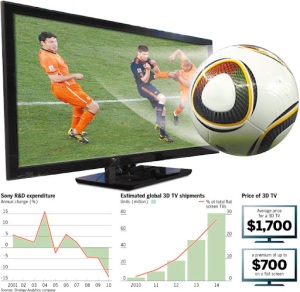 Do consumers have an extra $700 to spend for a 3-D TV? Likely, no, not most of them. They’ll be hard-pressed with predicted $5 a gallon gas and many energy and commodity shortages to spend much beyond a price point of $100 or so. Perhaps even less, around $75.

And what sort of device would be sold at that price point? A massive, home-based theater system? Nope. Something cheap, fast, and very, very handy. A super-video Ipod, basically, that can also double as an e-reader, an e-magazine reader, and so on. A cheaper, more versatile Ipad, basically. Aimed at the mass market.

With the FCC imposing by regulation, net neutrality, price pressures will naturally inhibit streaming video over 3G, 4G, and Wifi/Wimax networks. This makes the model of “download and go” and playing the media, anywhere, anytime, more probable. The Ipod/Itunes model. People like having a massive library of music, it is quite likely they’ll like a massive library, on the go, convenient no matter connections or not, of video.

We are likely to see an explosion, of cheap, more broadly appealing content, at the 99 cents model, set by Itunes and apps on Iphones. This can be singles, short stories, e-comic books, and “episodes” of serialized video content. And unlike the old style of top-down, 18-34 female oriented TV (and often, movie) content, the new media devices will be completely open to anyone. The Band “OK GO” detailed on the WSJ how they used the internet, YouTube, and personalized content to make a comfortable living without record label contracts. Various other artists are doing the same, selling everything from dinner with them to personal concerts to personalized swag and songs and so forth.

Consider this, in the new hard-stressed economic environment, most US consumers will be spending considerably less on media and entertainment. They’ll want a personal, cheap device to keep (likely with their computer) a media library of songs, movies, TV shows (by any name), magazines, books, and so on, all there for consumption in a hand, personal, and affordable form. This will herald a big change in how media is made and distributed.

The current model requires expensive budgets, and has many gatekeepers. Movies are expensive gambles, and so too are TV shows, with production budgets at around $3-4 million per episode, at around $66-$88 million per year. Much of the latter only paying back if a show hits at syndication or foreign sales, both under severe price pressure.

By being able to charge, directly, consumers of serialized entertainment, the break-even rate at roughly 99 cents per download is only 3 to 4 million downloads. And of course, the more downloads beyond those levels, the higher the profits. By cutting out the TV Network and advertiser supported middle men, much lower levels of viewership can hit break-even points. And a limited, three episode run can be constructed, contingent on say, downloads covering costs and indicating future profits by demand.

What does this mean? Far fewer things like “Nurse Jackie” and a lot more entertainment versions of “Call of Duty: Black Ops.” Because content creators won’t get paid unless their content is popular. Unlike today, when stuff like “Kick Ass” or “Scott Pilgrim Versus the World” makes creators rich despite almost no real appeal to anyone. Yes this also means a lot more “Twilight” like stuff, with hunky bad boy supernatural or superpowered Alpha males, and loser beta males, to appeal to the female market. But it will be balanced by stuff that guys like. Can anyone imagine a network TV show that portrayed Cold War Black Ops heroically? Even “the Unit” had to play the anti-Government, soapy, female-drama relationships angles to get on the air.

And the ability to create e-comic books, or e-books without major publishers, means even more content oriented towards (the only underserved audience, men) is likely. Certainly, Amazon and Itunes are vying to become profitable portals for this content, each in their own way. Netflix is likely to be a player, with perhaps Redbox and a few others (MicroSoft?) as well. But the model established with consumers seems to be, purchase a cheap download, put it on your computer (and media player, phone, Ipad, tablet, etc.), and play the media anywhere.

The corollary to this, obviously, is that a new shift to 3-D content will not bail out Hollywood’s content model. Instead, they will face constant erosion, not just from rampant piracy (made worse by recession), but viewer apathy. Hollywood has bet heavily that they can continue their current business model, where few movies or TV shows actually make money or find audiences, but content generally is subsidized by a few massive hits (and ancillary revenues, mostly from toys/merchandising) and repackaging old content in 3-D, the way old catalogs found value by making DVDs of TV shows and movies often decades old. Hollywood desperately hoped first Blu-Ray and then 3-D would prevent them from rethinking their business models and the lucrative role gatekeepers, and the entire infrastructure plays in creating and delivering content to consumers.

This seems unlikely to happen. Rather, it seems clear that democratization, and just as important, re-massification of serialized entertainment (TV) and movies is on offer with the transition to Ipad-style entertainment. Hollywood’s creative people will have to emulate OK Go, rather than the current audience-unfriendly model. Direct engagement with fans, by producing content or goodies they pay for directly, will be the model. Perhaps some content will feature ads, or embedded product placement, at reduced cost. That too, will obviously will be aimed at a very broad audience, rather than a narrow one, in most cases.

It won’t all be a land of milk and honey. Privacy issues and exposing user’s data, including age, gender, location, politics, and sexual preferences, are going to be major issues for interactive content, they way they are now with Iphone and Google Android apps. Abuses will occur.

But the major shift in entertainment is consuming cheap content on the go, personalized. Not massive and expensive home entertainment systems consumers just cannot afford. THAT promises to be a big change certain to shake up Hollywood.

Conservative blogger focusing on culture, business, technology, and how they intersect.
View all posts by whiskeysplace →
This entry was posted in culture, hollywood, more, technology, tv. Bookmark the permalink.

6 Responses to The Future Lies In Your Hand: Phone TV vs 3-D TV