TV Gets Older As It Runs Out of Young People

The Wall Street Journal reports that broadcast TV is getting older. Well, of course. TV ran out of (White) young people. As America becomes a bifurcated nation, one of aging Whites with money, and young mostly Spanish speaking Hispanics without money, cultural changes are already transforming America. Rock music has died as a new and engaging creative force, largely because the 1980’s was the last White cohort big enough to support innovation, coupled with the collapse of the Black family (and Church going thus choir training). FM radio such as Indie 103.1 is another example of not enough young White people to support what used to be a money-making institution. TV is getting older because its is running out of young, White people. And that will in the end, translate to a renewed cultural conservatism and set of attitudes, older people not being known for adventurism and open-ness to new experiences, risk taking, and thrill seeking.

Television is starting to act its age.

For decades the TV industry has operated on a currency of youth, creating shows that appeal to 18- to 49-year-olds, the age group advertisers traditionally consider most likely to buy new products, switch brands and spend on everything from cars to soft drinks. But as the nearly 80 million baby boomers continue to age out of the coveted demographic—the oldest boomers are turning 65 this year, the youngest 47—networks want to charge advertisers more to reach them. After all, these viewers still watch a disproportionate amount of TV, and they control half of all U.S. consumer spending.

From Ed O’Neill’s patriarch on ABC’s “Modern Family” to 51-year-old Hugh Laurie on Fox’s “House,” boomers’ influence can be seen in programming. On “NCIS,” TV’s No. 1 drama with an average viewer age of 57, strapping young naval investigators turn to wise 59-year-old Mark Harmon for advice. 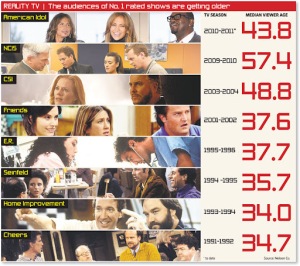 TV is just older. The accompanying graphic shows how key shows, have increased their average viewership age, over the years. While Friends and Seinfeld explored the idea of being young, single, and open to all sorts of relationships, or “Summer of George,” in various comic formats, today’s shows such as Blue Bloods are about the duties and responsibility of family. A remarkably conservative message, and one diametrically opposed to that of Friends or Seinfeld or much of anything else in the 1980s through the 2000’s. The idea of family and duty, in the person of a patriarch, hasn’t been seen on TV since the 1960’s and Bonanza.

This change is being driven by economics:

Currently, networks still charge advertisers more for shows with younger viewers. A 30-second ad on “The Good Wife” cost, on average, $108,000 in the fourth quarter of 2010, or roughly $25 per thousand viewers, according to SQAD Inc., a Tarrytown, N.Y., media-research firm. In contrast, on a Wednesday night on top-rated “American Idol,” where the average age is 44, Fox can charge $435,000 for 30 seconds—or about $46.75 per thousand viewers. “Glee,” one of prime-time TV’s youngest shows but whose audience is nowhere near that of “American Idol,” gets $47 per thousand viewers.
…
The networks want marketers to ignore age and pay for viewers based on income and other factors—in effect paying more for affluent viewers who are 55-plus. CBS Entertainment President Nina Tassler says the network has always created shows that appeal to all ages. But “boomers have always been a priority customer for us,” she adds.

Still, most marketers prefer to reach young consumers, whose buying preferences can make a product or service cool so that it eventually catches on with older buyers. “Young people are still prime targets for mortgages, car loans and investment advice,” says Joe Abruzzo, head of research at Havas SA’s MPG unit, with clients such as Dannon, Carnival Cruise Lines and Sears Holdings Corp. Networks are selling advertisers on older consumers “because that’s what they can offer.”

Pharmaceuticals, luxury-car makers and financial firms are on board. “This isn’t a wave, it’s a tsunami,” says Jim Speros, chief marketing officer at Fidelity Personal and Workplace Investing, a unit of Fidelity Investments. “[Boomers] have to feel like they’re seeing themselves in the [TV] spot.”

Marketers are on the trailing edge of the change. Cruise ships are not filled with 20 somethings, they don’t have the money. Neither are twenty somethings going to buy Viagra, or Diabetes drugs, or financial planning products, or retirement advice, or luxury cars, or much of anything in that class. The twenty-something will spend on electronic stuff, movies, and clothes, but his/her ability to do so is under tremendous pressure. The twenty something earns far less than a fifty-sixty something. Gas prices, food prices, and clothing prices can all constrain the twenty something’s ability to spend on consumer goods beyond the basics in a way that older consumers with cushions are less constrained. Inflation and prices rises hurt all consumers, but the twenty something is hurt the most.

And … there just is not that many of them, counting Whites. Given that a good portion of the younger residents of the US are Hispanic, with far lower household income (and illegals live in gripping poverty), the growth of young Hispanic consumers is an economic dead zone. Consider an illegal alien, making around $3.50 an hour, the going wage rate in the LA area (minimum wage is $8 an hour). He will not pay taxes, but assuming he works 2080 hours a year (40 hours a week times 52 weeks) that is only $7,280. Assuming he works 80 hours a week, every week, that is still only $14,560. Out of that, he must pay his room/board, his meals, and very likely a crossing fee to coyotes, compounded continuously, with retaliation to his or her family should he fail to make scheduled payments. He or she also needs to send money home (most illegal alien workers tend to be male, however). That’s not a lot of free cash.

What are the likely outcomes of a shift therefore, in TV and culture to an older, more affluent, and increasingly numerically inferior White group?

The first is the end of open-ness to Mexican culture. Punk and Pop bands in the 1980s, from Wall of Voodoo (“Mexican Radio”) to X, the Blasters, Los Lobos, the Minutemen, all incorporated various Mexican themed sounds and songs. It is remarkable, with Mexico such a huge influence on America’s future, and comprising essentially a great deal of America’s population, how absent Mexican culture is in current American music, films, TV, and so on. Only in food, has Mexican influence been felt.

This is not surprising. Open-ness to another culture depends on not being threatened by it. With the population replacement/displacement characterized by defacto ethnic cleansing, no-go areas, Whites as minorities in their own nation, the ability to be open and accepting of other cultures, let alone the one doing the replacing, is pretty low. White elites that listen to NPR currently don’t feel threatened, and find their “real enemies” are ordinary Whites in the suburbs. But culture is not made by NPR or PBS. Young White kids find themselves isolated and outnumbered, and so unlikely to adopt Mexican musical culture, or much of any other parts of Mexican culture. At any rate, there are not enough young White kids to provide an audience and the critical mass for experimentation followed by commercial break-throughs.

There is is no equivalent to a modern day Elvis, putting together the dance elements of Western Swing music, the soul-fulness of gospel, and the simplicity and emotional power of the blues. There are not enough White kids to supply a critical mass of young boys noodling around on their guitars in a garage, in off hours, and not enough White kids to provide the few that have anything new with an early, accepting audience (and early commercial success), and even less open-ness to borrow from other cultures when your own is under constant threat.

Instead, all musical innovation essentially stopped sometime in 1988. The model is now conservation of what exists, rather than creating something new. That cultural message, one that is accepted by both young and old, mostly, is of itself extremely conservative.

You can see this work itself out in what new electronic products generate buzz. Ipads are just another form of a computer. They might be cheaper, more mobile, and more handy for things on the go than older computers, but they are still just a computer. They aren’t flying cars, or laser weapons, or teleportation devices, or invisibility cloaks, or anything like that. And the cultural content on them tends to be re-runs of the A-Team, from the 1980’s, or other nostalgia fare. Aimed at wealthy boomers as much as young twenty somethings.

Economically, power is shifting, from companies catering to young people, Facebook and Twitter valuation bubbles aside, to those who create products aimed at the middle aged and middle class. With evolutionary changes not revolutionary changes in the offing. A better phone, not a flying car.

America has become, in one sense, a very conservative nation, culturally. And that change is driven by demographics. We just ran out of young White people, and that change is likely to work itself out in business, politics, and culture. Mostly in an aversion to change, risk, and all the brave new hype of a post-White America. The people who watch Kathy Bates and Tom Selleck are not interested in “Machete.” If anything, they are focused on maintaining the character and aspect of America as it was in 1984 or so.

Conservative blogger focusing on culture, business, technology, and how they intersect.
View all posts by whiskeysplace →
This entry was posted in age, culture, demographics, more, politics, tv, wealth. Bookmark the permalink.