Posted on August 9, 2011 by whiskeysplace 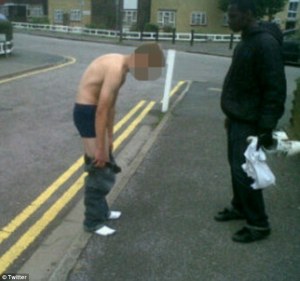 England has fallen. Quicker than I would have thought. Home Secretary Theresa May rules out use of the Army, Water Cannons. The situation is spiraling out of control. High Street areas, the ritzy places of Kensington, Notting Hill, and other “tony” areas have had rioters looting patrons of two-star Michelin restaurants. While Home Secretary May declares that “policing is done with the consent of communities.” Code words for no action that the Black, Pakistani Muslim, and now Indian groups that have effectively colonized England would object to, will be taken. As the MP for Northern Ireland notes, both the Army and Water Cannon have been used within the past year in Ireland. But against … Whites. Not Blacks, Pakistanis, or Indians. As the picture from the Daily Mail shows, a thug (Black) forces a White guy to hand over his clothes. The purpose being simple humiliation (the clothes won’t fit).

Meanwhile riots have spread to other cities. Bristol, Birmingham, and Liverpool. Olympic officials are said to be mulling yanking the Olympics from London and awarding them to some other city on an emergency basis. There are not enough police, those that have been mobilized from other cities … like Bristol are now stuck in London, where they have been fleeing rioters. The police can use no force against the mob, and the mob (nearly all Black or Pakistani or Indian depending on the section of the city) know it. The police are exhausted, working 18 shifts and limited when they do confront the mob to batons and pepper spray. Which will not cut it.

At this point, the utter weakness of England’s rulers is exposed. The rulers cannot even secure the property and persons of people in tony, ritzy areas. Notting Hill and Kensington are very, very rich. Islamists and Jihadists will see this weakness and mobilize their own people to create their own mini-states. Enforced by brutal action. What will England do in response? Police by consent?

Here is the end of PC Britain. As feckless as JK Rowlings Ministry of Magic, against Voldemort. With a politically correct female Home Secretary ruling out anything that would offend Black or Muslim-Pakistani mobs. [There are a few White kids engaged in the mob violence, but is vastly Black or Pakistani-Muslim.] And of course if say, Choudary can set up his own mini Islamic Republic (and rest assured he will) inside Britain, so too can hordes of people from very poor countries in North Africa or Africa come there and simply set up where ever they want. Taking what they want. If a mob can rob the tony patrons of a tony restaurant, why not Buckingham Palace? After all, that’s the consent of the Community! And why not have, say, half of Libya or Morocco show up at Dover Beach? Ready to take over? That’s the price of PC weakness. Of diversity. Of Multiculturalism.

England is finished. Over. Done. Dead. There is no one in the Conservative, Liberal, Labor, or any other party save the BNP willing to use force to preserve what is left of traditional England. No one. [No, not even the UKIP.] And the BNP has no real support in Parliament to form a government. There is no one with any will. To save what is left of England would require shooting hundreds if not thousands of rioters, quite dead, at this point. Locking the rest up, in ugly penal colonies in the South Atlantic while they freeze to death (with ample documentation) and targeted payoffs to certain agitators with the promise of a trip to the Antarctic if deals are not kept (and making examples of deal-breakers). As Machiavelli wrote, it is far easier to rectify things when the situation has not reached a crisis. Early diagnosis of social ills offer remedies that are far less drastic. But no one in England has the courage or will to act, which at this point means killing lots of rioters and nothing else.

What will take its place, is rule by mob of certain enclaves. Black leaders emerging from the mob will rule certain parts of London, which will look like African hell-hole cities, only colder and with snow. Pakistani Muslim leaders will do the same with other sections of major cities which will also be hell holes. And fleeing mob non-White rule will be a host of Englishmen and women. Who will be the first but not last European refugees effectively ethnically cleansed out of their own nation.

France will probably take most of them. And they’ll be the core of what promises to be an ugly and angry fight over the ethnic cleansing of Whites out of native European lands. No real effective action can be taken against the mob in the UK. The authorities retain enough power to prevent people from fighting back (as in much of the Harry Potter books the Ministry of Magic’s main goal was preventing any fighting back against Voldemort). But people will vote with their feet, even as shuffling refugees into France.

Who will stop the violence? Who will prevent rioters from simply taking more, and more, and more? Who is stopping them now from stripping White passer-by of their … CLOTHES!

No one. So the rioters will simply take more. Because there is no one to stop them. And they will rule. That is quite obvious. But would you want to live under the rule of the jumped up mob leaders sure to emerge as “rulers” of fragmented England? They won’t even be able to keep the power flowing, or sewage processed, or trash picked up. Meanwhile the “government” will be a shattered hulk unable to provide much of anything other than endless punishment to the White natives who are now quite visibly second or third class people in their own lands. Perhaps a few goodies will be handed out, but that is it. Control over London, and most cities, have been given over to the mobs, and there is no means to take it back. Nor will this stuff be confined to cities, it will spread to the countryside as well. Because there is stuff there to take, and no one to stop them.

So out of desperation, people will shuffle into France like WWII refugees, with what pitiable possessions they have left, and form the most visible but not the last examples of ethnic cleansing of White natives in Europe.

England has fallen. It will never be restored to what it was. What will remain is fragmented, non-White kingdoms and Big Man pseudo republics run by folks like Choudary. Islamic mini-kingdoms and the like, conquering England without much trouble. An object lesson of the stupidity of PC, Diversity, Multiculturalism, and the rest. At least the French will know, as will the Italians, the Germans, the Spanish, the Irish, and the rest, what awaits them.

Camp of the Saints arrived in the form of London riots. Because the saints were already there, people just would not see them (again, like the refusal to recognize Voldemort in the Potter books). Of course, there are now a whole lot of people who had something, a bit of property, made dirt poor overnight, in a place where its terrible to be poor, and White. Burnt out shops, stores, homes, and such. Survivors of those undoubtedly slain in riots and arson. These people will make Travis Bickle look like Barney the Dinosaur. And they won’t be a loner like Bickle, rather, organized. It was one thing for the OAS to try and retain a lost dream of Algeria. It will be another thing for a whole generation of Englishmen wanting to reclaim England, from exile in France. Ask the Israelis how it works out, with a camp of seething with resentment, exiles on your borders, dreaming of revenge and return of property. That is what awaits the new possessors of England, after their inevitable victory. As Machiavelli advised, humiliation is unwise, better to kill your enemy than leave him poor and alive. Undoubtedly the White guy forced to strip and hand over his clothes will have a life-long hatred for Blacks, and just as undoubtedly the picture in the Daily Mail will generate both fear and anger in the White British population. Which has no desire to experience the same.

Pictures have power. That picture, is bound to enrage most White Britons. Who fear it happening to them. And who are too numerous to kill.

Camp of the Saints is ultimately not sustainable, because it is one thing to force a man to hand over his clothes by reason of your superior legal and physical position (the White guy knows if he resists he will be both beaten by a much larger and stronger man, and go to jail in the bargain). It is quite another thing to keep trash off the streets, or the power going, or raw sewage safely processed. And another to build a modern military force capable of killing people efficiently in large numbers. Eventually those cleansed out will return, or their descendants, and they will be “Potter-like” in the battle finally against Voldemort, willing to make appalling sacrifices to end the threat once and for all.

The one caveat is that the UK Military, primarily the Army, could possibly step in with all other elements of society failing, and shoot half the rioters, with the approval of the Queen, and the majority British public. But that would entail a military rule and suspension of Parliament, PC, Multiculturalism, and the like. I don’t see that happening, frankly. Just more of the same in the picture. There is a reason that the current government is not willing to have the Army act, and that Labor is not calling for them either. The concessions the Army would demand would be too great. So England will fall, very far, and very fast.

All that is left is the rising of the Cromwell figure, in exile, in France. Where the French White natives look in fear and wonder and demand something be done on their own situation.

Who wants PC and Multiculturalism and Diversity if all it gets you is being stripped of your clothes (and everything else)? And that’s all it does get you, in the end.

Conservative blogger focusing on culture, business, technology, and how they intersect.
View all posts by whiskeysplace →
This entry was posted in diversity, england, fall, more, multiculturalism, pc. Bookmark the permalink.