The Inexplicable Decline of Women’s Tennis 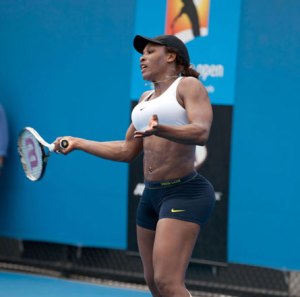 For some reason, totally unknown to marketers, women’s tennis has inexplicably declined both in quality, as observed in The New Republic, but also passion from the public and sponsoring revenues. Pay for tennis executives is declining, between 8 and 22 percent, as sponsorship also declined. The Women’s Tour (WTA) is losing Sony Ericsson, at $88 million Tennis’s biggest sponsor.

Women’s tennis has fully embraced the Williams sisters, and as seen above and below, they are not exactly the model of feminine attractiveness. More like linebackers in a dress. Meanwhile, more attractive players like Maria Sharapova (tall, blonde, speaks English) are not doing well on the tour, with few wins and lower recent publicity. 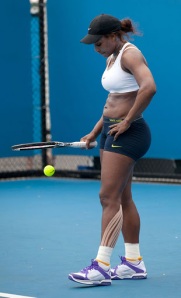 Tennis is not a sport like say, Basketball, which appeals to ever-narrower groups of Americans (the NBA under David Stern failed miserably in expanding in Asia, Chinese are happy to wear pirated Kobe Bryant jerseys, not so much at paying for games or visiting NBA stars). Basketball is a sport of individual athleticism, basically a dunking contest and nothing more. Any notion of team or cooperation has long left the building, around the time Elvis checked out. Nor is Tennis a sport like Football, a brutal endeavor of tough guys lining up against each in a literal battle over turf. 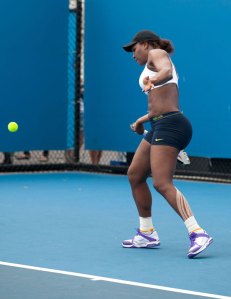 Nope, Tennis is a sport with pretensions still, to gentility and good sportsmanship, of tradition and grace. That goes doubly for Women’s Tennis, which is basically a competition to find the most graceful and athletic princess. The women who were truly embraced as Tennis Champions, were not ugly Eastern European Lesbians, or linebackers in a dress, who overpowered opponents like Godzilla squashing Bambi, but athletic, blonde, pretty, “nice” in deportment (on camera anyway), who every little girl wanted to grow up to emulate, and won the approval of every middle class father. 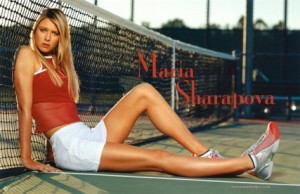 Women’s sports are different from men’s. Not a competition to find the toughest guy who can take on the most brutal punishment, and dish it out too, or cooperate with other men in defending turf, or engaging in one-on-one displays of athletic dominance. Nope, it is at heart an exhibition of feminine resilience and endurance matched with grace. Certainly physical, always demanding, women’s sports requires the admiration of millions of middle class (White) girls who would like to be known for prowess in something as well as just beauty. This is why Chris Evert, and Tracy Austin, and Katarina Witt are remembered fondly, while Martina Navritolova, and Tonya Harding are not.

Women’s tennis has embraced the Williams sisters. Who undeniably have athletic dominance. But that has led only to the decline of the sport. Does anyone really think that millions of Middle Class White girls dream one day of looking like Serena Williams? Really? All their athletic dominance, their power, their brutal efficiency, mean nothing as it meant nothing for an Eastern European Lesbian before them.

Women’s tennis exists to sell their stars, as the kind of women little girls want to be when they grow up. This reality gets clouded by executives excited about “breaking new ground” or the pure dominance of not very feminine women’s players. Be they Lesbian or Linebacker. Sometimes people cannot even see the obvious.

Would an alternate universe WTA where say, Sanaa Lathan or Gabrielle Union, more traditionally feminine and attractive women, were dominant champions have this difficulty? My view is no, they would not. At least, not in this degree. People do however like looking at, and following those, who resemble an idealized, younger, stronger, more attractive version of themselves. Black men and women are not racist for figuring that Woody Allen movies and Seinfeld are not for them. Nor are Hispanics racist for thinking Country Music, Larry the Cable Guy, Sundance, and the IFC Channels are not for them either. There is nothing wrong with Black people preferring Tyler Perry movies, and Rap Artists like Jay Z, to Dogme 95 movies by Lars Von Trier, and Justin Bieber. And there is not anything wrong with White girls (and their parents) preferring a White tennis star to a Black or Hispanic one. Wanting to see someone like yourself onscreen is not being one step away from a Klan rally. That this has to be said speaks to the pathetic nature of today’s society, and terminal PC which masks an obvious hatred for “the Wrong Sort of White People.”

At any rate, Women’s Tennis will continue its decline until another Middle Class White Princess is found. Not Linebackers and Lesbians.

Conservative blogger focusing on culture, business, technology, and how they intersect.
View all posts by whiskeysplace →
This entry was posted in feminine, more, williams, women's tennis. Bookmark the permalink.

23 Responses to The Inexplicable Decline of Women’s Tennis