Germans Are Weird, Part 5,699 as the EU Collapses

Posted on February 14, 2012 by whiskeysplace

Recently, Bavarian Finance Minister Markus Söder posed for a Carnival Themed TV Show Friday, in full punk-rock regalia. His t-shirt reads “Hast Du mal nen Euro?” or “Do you have a Euro?” Click on the link to see more pictures, to get the full effect. Söder is a CSU party member, his main issues being a head-scarf ban in Bavarian Schools, no pardons for the Red Army Faction/Baader-Meinhof gang members, no EU membership for Turkey, and opposition to genetically modified foods. His closest American analog would be a combination of Rick Santorum, Michelle Bachman, and Mitt Romney.

Can you imagine any of those people dressing up like this? Or indeed, any Italian, French, or Spanish regional finance minister? Perhaps some of the nuttier English regional politicians would do so. And perhaps some of the nuttier Scandinavians. But no one in America or any of the Catholic countries of Europe would allow such an assault on their dignity, and the dignity of the office. They might be corrupt, and inept, and incompetent, but a certain sense of style and dignity still remains. Even Berlusconi, that old devil, cut a stylish figure without dressing up as a clown, literally. 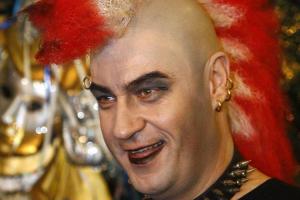 And here is the reason the Euro is doomed. While Greece is in flames, over the government (an unelected caretaker one at that) decision to implement austerity measures to repay debts that realistically, cannot ever be repaid, German regional finance ministers dress up as clowns. The Greeks and other Southern Europeans act like clowns, taking on debt they knew they could not repay for a big, decades long party (this applies to Ireland as well). While the Germans acted mostly soberly, but break out the clown suits to play the clown for a week or so during Carnival.

Germans are just weird. Judicious, cautious savers and prudent spenders, who can’t resist playing out ridiculous costumes in public during big parties. Meanwhile, Southern Europeans have the sober dash of style and fashion (no one is more put together than Parisian women or Milanese men) but a complete clown show of society, that simply does not work on most levels for most people there. Meanwhile much of Athens is burning as over 45,000 protesters faced off against 4,000 riot police.

There is simply no way Greece can repay all its loans, at best the EU bought some time at the cost of likely, the government collapsing in April when elections are held. And the new government eagerly repudiates the deal made by the old one. Greeks are unlikely to starve themselves to make German, and French, and Belgian, and other EU banks whole. Heck Belgium is in chaos, with firefighters soaking cops and the Prime Minister over lengthening the retirement age (firefighters working to age 65 is ridiculous). That nation is riven by conflict and has not had a functioning government for ages. Though it is little covered in the press, dissolution of the nation becomes more likely as Flemings and Walloons fight over the ever shrinking spoils pie.

The EU, like the Thousand Year Reich, Napoleon, the Holy Roman Empire, the Hapsburg Empire, Charlemagne, were all doomed from the start. Only the Romans unified most of Europe, and then only because they had absolute military dominance, and the will to use it. Most of the time, Europeans are just too different from each other, and prone to all sorts of schisms and regionalism, to work effectively under one structure, economic or political.

Most of Germany would be happy as “Greater Switzerland” and throwing itself nice big parties every year, while most of the time it works soberly and steadily making high-value export items. Germans are as unlikely to sacrifice for Greeks as Greeks are for Germans. That’s not a bad thing. If Germans want to be weird, they have every right to be weird, as long as they don’t inflict it on anyone else. If their Finance minister of the biggest province likes to dress as a punk rock freak for Carnival, what’s the harm?

But the failure of the EU, slow motion train-wreck as it is, ought to caution (but it won’t) the American elites. Importing tens of millions of Mexicans, and expecting them to act like sober, middle class White Americans, is a fantasy of Eurozone proportions. Mexicans like being Mexican, its what they know. They have no intention of turning themselves into high-IQ knowledge worker cubicle drones. And would not do so even if they could. A few can and will become engineers, or scientists. The number will probably only slightly exceed the number of Asian guys playing in the NBA. The rest will continue to live and work and conduct themselves here as they did in Mexico. Meaning American income, educational achievements, technology, and everything else will inevitably decline to Mexican levels. Don’t expect anything out of a Silicon Valley surrounded by Mexico. Carlos Slim did not create Apple Computer, nor drive the development of the Ipad. Mostly, he played crony capitalist and extorted monopoly rates from Mexicans forced to use his companies to make phone calls by either land-lines or cell phones. That’s good for Carlos Slim, bad for most Mexicans. And that is the culture and people our vote-harvesting elites have imported.

There is nothing wrong Mexico, that Mexicans left along to sort things out cannot figure out for themselves. If they wish to. Every people has the right to self-determination. To live their lives, among themselves, not ruled or being intertwined with those they do not wish to live among. But that is something for Mexicans alone to figure out. In the meantime, we have our own clown show. In the deepest recession since the Great Depression, we have millions of illegal aliens taking jobs Americans want to do, at wages below the living costs of Americans with families.

Germans may be weird. Their politicians fond of dressing up like Punk Rockers for Carnival (a bit too fond, if you know what I mean). And they have their own immigrant problem, with people who do not fit culturally and never will (mostly from Turkey). But as problematic as their immigrants are, they have fewer of them and they are not constantly importing more.

You might argue that the biggest clown show in the world is in America. Where SWPL yuppies in a never ending battle against “the wrong sort of White people” have imported a mass of vote-mercenaries who will assuredly kill their hipster paradises of Portland, Seattle, San Francisco, Austin, and Ann Arbor, dead, dead, dead! Not too many working guys from Michoacan or their descendants are big into irony, feminism, gay rights, or saving the planet. Mostly, they throw trash out the window (as Victor Davis Hanson attests) and stage pit-bull and cockfights. People from Michoacan don’t ironically drink Pabst Blue Ribbon and get designated drivers, they drive drunk without a license and run over lots of kids, elderly, and each other. The folks from Juarez don’t earnestly send money to Greenpeace to save the Gay Whales, they mostly hang headless bodies from bridges, or roll grenades into discos, or become the victims of the same.

Conservative blogger focusing on culture, business, technology, and how they intersect.
View all posts by whiskeysplace →
This entry was posted in culture, finance. Bookmark the permalink.

23 Responses to Germans Are Weird, Part 5,699 as the EU Collapses