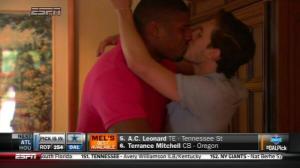 With the selection of Michael Sam as the 249th draft pick in the seventh round by the St. Louis Rams, the NFL has gone All-Gay, all the time. A nicer thing couldn’t happen to a more deserving league. Sam’s canny move in coming out assured his selection. The NFL could not afford the negative publicity of NOT picking the only Openly Gay College Football Player eligible for the draft. A smart move by a guy with limited speed, strength, and size, likely to be completely ineffective against the NFL’s players. While Sam was All-SEC Defensive Player of the Year, even a team like Alabama or Auburn has a number of walk-ons and players who will not be going to the NFL. The NFL by contrast is filled with the best players every year from College Football. Instead of facing one great offensive player, and the rest merely college players unable to make it to the NFL, Sam will face a team made up entirely of the very best, greatest college players. Which is why the scouts were so down on his performance, and likely the NFL had to lean heavily on the Rams to take Sam in exchange for favors to be named later.

But the fun will really begin with the repeat of Sam’s smooch of his “boyfriend” every game, which ESPN and every sports page will blast in everyone’s faces. As well as the reaction of mostly ghetto Black players in the locker room. Well, what could go wrong? Everyone knows rap music, the favorite of Black NFL players, is remarkably tolerant and accepting of gays.

The NFL has steadily under Pete Rozelle and Paul Tagliabue expanded its reach, its money, its presence in American life. By presenting a fairly even competition, with TV-friendly rules and promotions, and vicarious “nations” to replace the faltering American one, the NFL expanded inside the US to be the premier televised sport with TV revenues of around $9 billion for 2013 according to Forbes, but All-Gay all the time puts that in jeopardy. ESPN may have proudly broadcast the gay kiss during the draft, triumphantly “shocking the bourgeoisie” but that moment turned off legions of NFL fans. 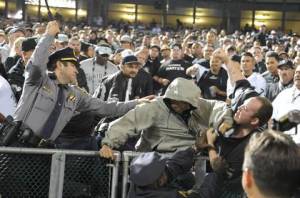 Who, to put it mildly, are not exactly SWPL, gay-friendly, metrosexual lovers of all things organic and NPR. NFL ownership is concerned mainly with fitting in with other elites, particularly the media which is itself a hereditary position filled with the lesser children of elites or children of lesser elites. What turns on Keith Olberman, Tony Kornheiser, and the writers at Grantland is a turn-off for fans. This ought to concern the NFL owners (but it doesn’t, because they are fat, happy, and stupid) as the NFL has been unable to expand overseas and must find all its revenue among the American audiences. Scratch that, the White Middle Class American audience, who remain the only group capable of paying the fees associated with the NFL’s “Sunday Ticket” and a money making proposition for the league and advertisers.

No one is exactly rushing to reach the gay audience to sell cars, beer, life insurance, and the like. There are too few gays, and they are less wealthy than imagined, to make any real money for the league or be profitable to reach for the sponsors and advertisers. Just like the mis-steps Marvel has made with “Agents of Shield” (more on that later in the week, hopefully family health permitting), the NFL has traded an audience that doesn’t matter: media types, women, gays, for one that does: middle aged, middle class White guys. Who I assure you don’t care for gay smooches.

If the NFL wanted to reach Ireland Baldwin, the famously “rude little pig” daughter of Alec Baldwin and Kim Basinger, actress/model/whatever, dating (i.e. having sex with) bi-sexual Black Rapper Angel Haze, well mission accomplished. [That’s her, above.] But the reason the NFL made this error, in signing Michael Sam and going All-Gay all the time, is that they’ve conflated elite values with mass values. And think there will be no consequence for being All-Gay, all the time.

Sam is a mediocre at best, NFL player. He will have to be signed, and started. With this much hype, hoopla, and “Black gay hope” invested in him, if the St. Louis Rams don’t sign him and not just play him but start him, the gays, media, women (who love gays … and Blacks, see Baldwin, Ireland) will have a screaming social media fit. And sponsors, etc. will complain and threaten to cancel deals. Like I said, it was canny for Sam to come out. Absent being known as openly gay, he would never have been drafted or signed as a free agent.

Just imagine the locker-room reaction, to having a player who cannot help produce wins, and thus a Superbowl opportunity (which means money, fame, and a longer playing career plus more opportunities after playing in the NFL), sticks around and is All-Gay, all the time. Just imagine the fun to be had with guys who have six kids by five different women, and a rep for thugging it up, mixing with All-Gay Michael Sam.

And just imagine the fun to be had with ESPN and other networks breathlessly covering Michael Sam in every game, panning up to his “boyfriend” who will preen and prance for the camera.

I couldn’t be happier. The sooner the NFL dies, the better. If religion was the opiate of the masses, back in the 19th Century, professional and college sports plays that role today. The NFL in particular is obnoxious in that Black athletes are at the heart of it, along with deliberately not seeing their flaws (mostly) as human beings. The NFL prefers (along with the NBA) Black athletes. There is an endless supply of them, mostly ill-educated at best, easily exploited, easily replaceable. This keeps the labor cost down, even the grossly inflated salaries of today’s Black superstars are a bargain because few play the life of the contract much less meet performance metrics, and the average career of the NFL player is only four years. With the league about 72% Black or so, this works out to be fairly cheap for the owners. Black players have done a historically poor job of organizing, and the superior athletic ability (on average) of Black players combined with an endless supply of very athletic, very ill educated, very low IQ athletes benefits the NFL owners as they never really have to share the TV, merchandising, and other revenue sources with the players.

Worse, the NFL consistently covers over or excuses away or outright ignores the blatant criminality of much of their Black superstar athletes. A league that celebrates Ray Lewis, OJ Simpson, Michael Vick, is bad for America. It provides athletic excuse after athletic excuse for Black dysfunction and has been if not the only, the major force in White America refusing to acknowledge Black underclass dysfunction and demand changes or force compliance. Every White middle aged guy cheering “his guy” making a touchdown for “his nation,” a team not a real nation, is one more excuse to roll over and allow disparate impact, “racial profiling,” and other complaints to prevent any real measures to combat the Black underclass crime wave ongoing since the late 1950’s.

The more White Middle Aged America stops watching the NFL and engaging in excuses and fantasies, the more something can actually be done to make places like Baltimore, Detroit, and Gary Indiana liveable: locking up most violent criminals for long periods of time in isolated prisons, 98% of whom will be Black. America’s cities can be reclaimed: locking up about 50% of young Black men living in them for about forty years would do the trick.

So I for one am delighted with the All-Gay, All the Time, new NFL. You go Gurrrrrllllll! Be as glittery and as gay as you like. You’ll get the audience for (non-Olympic) Men’s Gay Ice Skating. Bored White women, gays, and nothing else. About 300,000 viewers or so. Enjoy your ads from Sequin House, Nair, and Real Housewives of Anchorage NFL! I’ll be watching racing.

Conservative blogger focusing on culture, business, technology, and how they intersect.
View all posts by whiskeysplace →
This entry was posted in gay, nfl. Bookmark the permalink.